Marhaba from the house (beet) of meat (lachem)

This past weekend we went to Hebron and stopped at a small village on the way to hear from the Christian Peacemaking Team (CPT) that was living there. On our way to this village, we were stopped at a flying checkpoint (for those that don't know, this is a checkpoint within Palestine that moves on the whim of the IDF) where we waited for an hour until they finally decided to let us through, under the on-the-spot guise of being agricultural students who wanted to look at the town's "ancient farming techniques." We got an escort of five soldiers to the tiny village and during our presentation from CPT, a few people scolded the soldiers for bringing fear and guns into the peaceful village. The only real threat there was that the tea the children brought us was boiling hot. Through CPT we learned that there were many injustices occurring in the village: demolition orders on every single house, settlers chasing the kids on their way to school, people being separated from their farming land... it was very heartbreaking.
Afterwards we got back on our way to Hebron, passing the same place where we had been stopped that morning to discover the checkpoint no longer there.
Hebron was kind of a ghost town: empty streets, checkpoints every couple of blocks. We learned that there was a lot of tension in this city; partly due to the fact that the settlers living there were the most fanatic in all of Palestine...they were also American Jews from New York. I think the picture that remains in all of our minds when we think of Hebron is this one street in the market: Hanging overhead was mesh wire that sort of separated the Israeli settlers from the Palestinians below. Apparently it was put up to protect against things that were thrown down by settlers, but dirty water, acid and urine were also thrown down and got through the mesh, and so most of the shops beneath remain boarded up for safety and sanitation reasons.
We also saw the mosque where Jacob and Rebecca were said to be buried.

Sunday we had a free day so L and K went to church with their host mom at the Church of Nativity, in the Greek Orthodox part. We understood nothing but appreciated the fact that they used all their senses to feel God's presence: singing, listening, eating bread, smelling incense, standing up and sitting down constantly, etc. Afterwards we met up with J and C and headed to Jerusalem for the day. We did the Via Dolorosa, which is the route that Jesus walked on his way to the cross. It was really interesting and one of first religious encounters during our time here. We ended at the Church of the Holy Sepulcher where we got the chance to witness a short ceremony and spent a few seconds inside of what they believe is the site of Christ's tomb. Then we ate lunch at an "Armenian Pizza-Steak Restaurant" which had really gross food: we missed our host family's delicious meals. C and L also bought a guitar which we are all quite excited about. Before we left we went to the top of a building and took some amazing pictures. C and J also went to a church there that evening.

On Monday after work and class we had our first casual discussion group with the rest of the PSE and it was really awesome to hear how people are processing things and what they're thinking about. We are really blessed to be surrounded by a diverse, smart (kids from Yale, Harvard and Princeton) and justice-seeking group of people.

On Tuesday L had the unique chance to go to the graduation of school in the village she works at. It was a great opportunity to show support for the village youth that her volunteer placement works with on a daily basis. The ceremony itself was a crazy experience with many speakers, few people actually paying attention to what those speakers were saying (though no one seemed offended by this), and a break halfway through the ceremony for a snack (Coke and cake). L has had a lot of opportunities this week to continue developing relationships with the Muslim men that run the youth center and with a group of teenage girls that visit the center almost daily.

Today K and L went to their first non-violent protest (the same protest in Masara that C and J went to last week). We were a bit nervous at first, but we also felt called to stand by the Palestinians and show them our love through our support of their desire for their rights. (Don't worry parents, it was very safe!) A group of Israelis against home demolitions played drums, there were chants, and a couple guys talked about wanting to have rights for Palestinians. It was a cool experience.

On another note, we realized as we began writing this 3rd blog that we have forgotten to mention a very special friend that our team has made during our time here, a fellow that we affectionately call "Majnoon Diik," which means "Crazy Rooster" in Arabic. This rooster, that belongs to the neighbors of K and L's host family, quite literally crows 15-20 times each day. We've decided that Diik is either blind or narcoleptic (or both...?) since he either cannot see when dawn is actually breaking or he falls asleep every half hour or so, waking up over and over again thinking that he needs to crow the morning into existence.

This week in Arabic class we've been attempting to learn the Arabic script. For 3/4 members of the team, it has been extremely difficult considering both how different it is from English and the speed at which we are expected to know it (however, C is turning out to be somewhat of a showoff). Our teacher, Miss Aida, seems to have a special place in her heart for J because of his ability to giggle at inappropriate times and make the whole class laugh with him. She even made him sit up front with her and be her special helper one day this week. 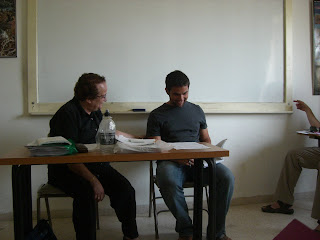 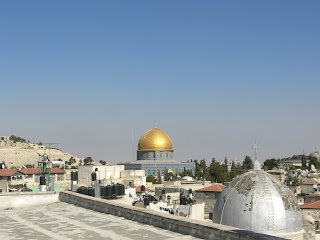 Last night we had our weekly cultural night: this week it was a game of futbol between the PSE participants and the HLT staff. We lost but played hard and had fun. Afterwards there was a delicious BBQ and it was really relaxing to just hang out and talk.

We continue to discuss, think and pray both about how we are processing things now, and what we will do when we get home. Pray for clarity and wisdom and sensitivity for this complex and emotional issue. Also pray for C and K as they seek purpose in the maintenance work they are doing at HoH, for J as he finds ways to serve the people at his volunteer placement in spite of they're very limited resources, and for L as she learns how to make herself available for Christ to love the Muslim community she is working with.

Much love in Him,

Team Bethlehem
Posted by Katiee at 9:34 AM

You guys are so cool. I love reading your posts! Praying for you!