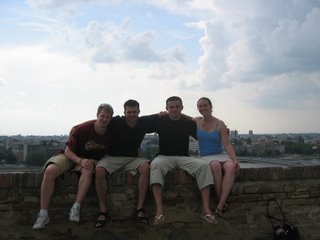 On Wednesday, our entire team came to volunteer at the Christian kindergarten. We spent several hours playing with the kids and we came up with another much adored art project – paper cut-outs (such as hearts folded and cut out in such a way that they are all attached to each other). The boys headed off to ADA again to help with baseball and the girls went back to Genex to meet up with Mike, a member of University Presbyterian Church who came to explore ministry opportunities in the Kosovo region. We met him previously at a meeting of the Balkan Task Force before we left home, so it was exciting to see a familiar face in Serbia. In the evening, one girl, Jelena, came over to make jewelry (earrings, bracelets, etc.) with Annika and I. We also had a chance to go over to Samuil and Nada’s house, which always results in conversations that last for hours and a wonderful time for all. Nada made an amazing cake and we enjoyed their hospitality very much, considering their home is so comfortable and cozy.

Thursday presented us with an opportunity to visit the Roma (also known as “gypsy”) community near Zemun in Belgrade. Many Roma are Muslim, though we met up with Pastor Herman, who is leading a small group of Protestants in his community. Samuil, Bojan, Slobodan, and our team came to bring clothing donated to the Roma from students affiliated with EUS. The donations would not be given to Roma in this community, but rather distributed in the poorest Roma community in Belgrade, which is located across from the Hotel Inter-Continental. The Roma slums in that area create a striking contrast with the Hotel Inter-Continental, a famous five-star hotel on the opposite side of the highway. After dropping off the clothes, Pastor Herman showed us around the community, giving us a chance to see the church (situated in a small flat, with one room for the service and one room for children), the kindergarten, and a piece of property where they hope that one day the church will be relocated to, if enough money can be raised. I was amazed by the architecture within the community, considering many of the houses are huge and very elaborate with large families living together. Eventually we came to Pastor Herman’s house to meet his wife and two children (Martha, 9, and Marco, 3). They are such a wonderful family – we hope to have a chance to come back and assist with their ministry more before we return home. Following our time with Pastor Herman, we went to the EUS office for the weekly prayer meeting. We ended our evening with a visit to the Fashion Café, which has free salsa lessons every Thursday night. The Fashion Café is one of many boat cafés on the Danube River and definitely one of our favorites. We went with a number of students, as well as Samuil and Nada, and even a fellow American, James, who is working as a missionary in the city of Nis (the south of Serbia). One of the most entertaining moments of the night was when RJ was nominated by Samuil to take part in the “Man of the Boat” competition, which gave him a chance to show off his salsa skills. Although he did not win, he ended up sharing his testimony with the guy who did win – a surprising twist in a great evening.

In the morning, Annika and I boarded a bus to Mitrovica, a very unique city within Kosovo. Our bus ride was long (around six hours), though we made it safely to the city and met up with our hosts, Kuka Maria and Nicky. Kuka Maria is from Finland and Nicky is from England – they are serving as missionaries through OM on the Serbian side of the city. Instantly we discovered that the city was in fact two cities – one Serbian, one Albanian. Serbians make up around 25% of the population and Albanians make up around 75% of the population – and they live on separate sides of the city divided by a bridge (which is heavily guarded by UN, NATO and other soldiers). Prior to the conflicts in Kosovo around 2001, the city had been entirely integrated with Serbians and Albanians living as neighbors. However, when NATO ultimately intervened the city was restructured, so that people are ethnically divided. Foreigners have no trouble going between the Serbian and Albanian sides of the city – Annika and I crossed the bridge many times. Serbians and Albanians remain entirely on their own side – you will see people walk up and down the streets on their side and as they reach the bridge they simply turn around and walk back. This is considered to be the most divided city within Kosovo – at least the most obviously divided. You have to be aware at all times of which side you are on when interacting with people, considering there are many important distinctions – language (Serbian/Albanian), religion (Orthodox churches/mosques – although strangely enough only the Albanian side has a Protestant church), and even money (dinars/Euros). Despite seeing heavily armed soldiers driving down the streets in armored vehicles everywhere (such as KFOR, the NATO Kosovo Force), we felt really safe. This area was hit hard by the March 2004 riots in Kosovo, though there have been no major incidents since that point in time (at least, that we were made aware of). Kuka Maria and Nicky live in a small Serbian village outside of Mitrovica and coordinate a number of ministries for Serbians in the area. Due to our long day of travel we were happy to settle into bed at their wonderful flat – though we were excited to be in a new place and to see how God might use us in this area.

When Annika and I woke up, we still couldn’t believe that we were actually in Kosovo. The day before, when we stopped at the international border between Serbian and Kosovo, the UN soldiers that checked our passports had told us that it was the first time they had ever seen passport pictures with smiles – perhaps not many American girls pass through here. We began the day by heading to a small Serbian enclave within a larger Albanian village. There are many situations like this within Kosovo, which add to the political challenges in this region. When we went to the first enclave we met with an older woman baking bread in her clay oven and spoke with her about life in the village (thanks to Kuka Maria and Nicky’s stellar Serbian abilities). We discovered that the people there are basically prisoners in their own homes, because they are afraid to leave the Serbian part of the village to get anywhere. As a result of this there are UN buses that run three times a week, twice a day (morning and night) to help people get to larger Serbian villages for shopping and even just getting away from home for a bit. Kuka Maria and Nicky run a kids club for Serbian kids in this particular enclave, so we then went to play “Uno!” with lots of kids at the local schoolhouse – which was a blast! We then headed to another Serbian enclave, though on the way we stopped and looked at an Orthodox church that had been heavily damaged in the March 2004 riots – it was a sad sight to see. The church is located in what is now a primarily Albanian section of the village, so it’s a very visible reminder of the divisions in this area. The next enclave we arrived at amazed us even more than the first one, because we drove down a long road with no outlet to reach it. As we drove down the road we could see that we were in an Albanian village, though when we reached the very end of the road (which was horribly full of holes – like a really jerky roller coaster ride) we discovered the small Serbian enclave. However, as noted, there is no outlet – so the Serbians must drive down the road through the Albanian village to get anywhere. Up until recently there had been a French police station between where the Albanian village ended and the Serbian village began, however for some reason the soldiers have been removed and all that is left is a building with barbed wire around it. When we reached the village we tried to meet with the leader of the village, though he was unfortunately unavailable. We went to this area because Kuka Maria and Nicky wanted to look into the possibility of building a playground within the village for the Serbian children, considering it is a rather poor area with little for kids to do other than work in the fields and play around the house. Those who we did talk to were very excited about the possibility of the playground, so we hope that this will become a reality for the children there. The Serbians in this area are also very reliant on UN buses to get anywhere outside of their village, though it seemed that the way in which the road has no outlet except through the Albanian village even magnifies the problem – it is frightening to think of having no escape route should a situation escalate to a dangerous level. We ended the day with going to a birthday party for a little girl who lives near Kuka Maria and Nicky, which gave us a great opportunity to sample more amazing Serbian food (including an incredible banana cake) and speak with more people about their lives here. Everyone was so generous and kind – we could not help but feel at home. One funny story – everywhere we went older women were trying to introduce Kuka Maria, Nicky, Annika and I to their sons… there is a lot of pressure for women to find every girl a “man on a white horse.”

More recent updates to come soon - internet access is a bit unpredictable... Pictures are coming too! Hope all is going well with you and we miss you!
Posted by Erin Shields at 4:22 AM

It sounds like you guys are having an amazing time and doing some great work. Prayers as you continue to be a blessing to the people of Serbia. Pozdrav!
~Hillary