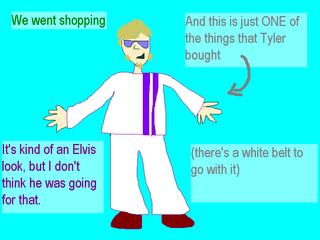 Top O' the mornin' to yeh! They never EVER say that here. So don't play that stereotype. I put up a substitute picture, since the real pictures take forever to load (and I'd have to go get the stuff), but I thought this might sum up our time in Belfast. We arrived at Derryvolgie Hall on Sunday afternoon - after being snuck out of the Kilcooley church so that we wouldn't be egged - and have been blessed with individual rooms and showers with AWESOME water pressure. We did some serious shopping on Monday, accompanied by good friends from both the Lowe Memorial and Lucan teams. I think we spent about 7 hours or something shopping, of course praying amidst it all to keep in mind that we are on a mission trip . . . but we got some great stuff. That evening we were priviledged enough to meet up with a portion of the Carlow team (our first team in Ireland) which was so amazing and quite good "craic". It's really strange to think that we didn't know any of these people before the summer started. Although, Mel and I did calculate it out, and it seems that we have met approximately 120 new people this summer, and that's just the leaders from the camps. You add in members of the congregations and all the kids we built relationships with, = mind boggling. Tuesday we took some time for ourselves (aka more shopping, and Brian got a hair cut, also watched Man on Fire with Jaffa from Carlow while eating sandwiches from the best place in Northern Ireland, apparently) and then met up with Michael and Julie Peacock for tea (dinner) which was absolutely fabulous. SO good to meet up with them again. I forgot to mention that on Sunday night we met up with Derek who is the minister of Fisherwick Presbyterian Church (http://www.fisherwick.net/home.htm) in Belfast and attended their evening service. It was great, and we also met up with him yesterday morning which was wonderful as well. We spent the rest of the day with Christine McClelland (who headed up the Lowe Memorial team) touring Bangor and the east coast. They have amazing ice cream here - honeycomb/pooh bear, and choco pooh bear. It's beautiful. We also had all you can eat chinese buffet - do we have Honey Chili Chicken at home? because it's everywhere and it's gorgeous. Anyway, today we are off to Route 66 Bible Conference in Cookstown, hoping to have a blast and learn a lot. There are a handful of people from camps that'll be there, which is exciting in itself. We can't believe we're coming home in less than a week, so if you could pray for our hearts to be prepared for that transition, and the fact that we have to give up living in Ireland!! I think it's a pretty sure bet that we'll all be coming back here some day. Thanks for your continuous support! Hope you all are doing well!
In Him,
Becca, Mel, Brian and Tyler
Posted by Becca at 2:59 AM